Back in the Day

Welcome to the Portland Climbing Blog

Why write a blog? For some time we have wanted to have a forum where we could share our thoughts and experiences of climbing in the place that we love: Dorset. So, alongside news about our commercial activities, expect to find here the latest Dorset climbing news, route-beta, topos, new route information, training tips and much more...

The first in our series on periodised training, this article focuses on getting a base level of climbing fitness

Aerobic Restoration & Capillarity training, or ARC, is the best method of improving base fitness level for climbing, and is the foundation which all subsequent training can be built upon.

Everyone who pushes themselves when they climb has probably felt that dreaded sensation when a comfortably easy climb suddenly turns into a fight against terminally pumped arms.

With increased intensity our muscles are working harder – increasing the contraction of muscles diminishes the blood stream restricting the supply of oxygen. Muscles need oxygen to function effectively over extended time periods, but can continue for short periods without: this is anaerobic exercise( as opposed to aerobic exercise). Unfortunately anaerobic exercise generates by-products in the blood (lactic acid), which inhibit the functionality of muscles. In a technical sport like climbing, a buildup of lactic very quickly leads to a massive loss of ability.... 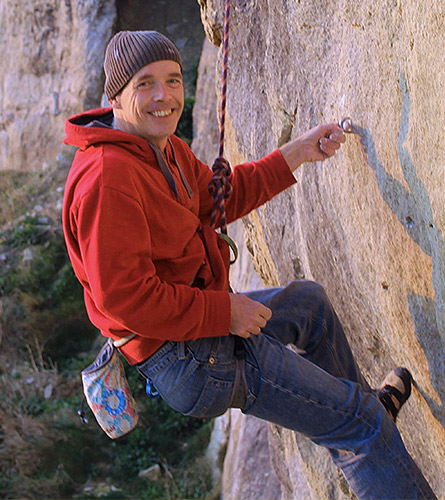 ARC Training at the crag

05Steel in the Soul

Mick Ward's piece about one of the most significant figures in Dorset climbing, Pete Oxley.

On an early visit, in a glorious Portland sunset, Michele and I wander along the top of Wallsend. She passes her binoculars to me. Clumsily I fumble with a plethora of blurry images. Suddenly they focus, with almost unbearable clarity.

Far away, a tiny figure is fighting his way into a belt of overhangs, his top fluttering in the wind. Even from this vast distance, you can tell he’s giving it all that he’s got. And, instinctively, I know who it is. Already I’ve exchanged harsh words with two editors on his behalf. But he cannot know that, any more than he knows he’s being watched.

Moments later, he disappears. I lower the binoculars, try to explain. It will be ten more years before I finally meet him. And, by then, I too will have fallen in love with Wallsend.